Epidaurus was a small city in ancient Greece, on the Argolid Peninsula at the Saronic Gulf. Two modern towns bear the name Epidavros - Palaia Epidavros and Nea Epidavros. Since 2010 they belong to the new municipality of Epidaurus, part of the regional unit of Argolis. The seat of the municipality is the town Lygourio.

Epidaurus was independent of Argos and not included in Argolis until the time of the Romans. With its supporting territory, it formed the small territory called Epidauria. Reputed to be founded by or named for the Argolid Epidaurus, and to be the birthplace of Apollo's son Asclepius the healer, Epidaurus was known for its sanctuary situated about five miles (8 km) from the town, as well as its theater, which is once again in use today. The cult of Asclepius at Epidaurus is attested in the 6th century BC, when the older hill-top sanctuary of Apollo Maleatas was no longer spacious enough. 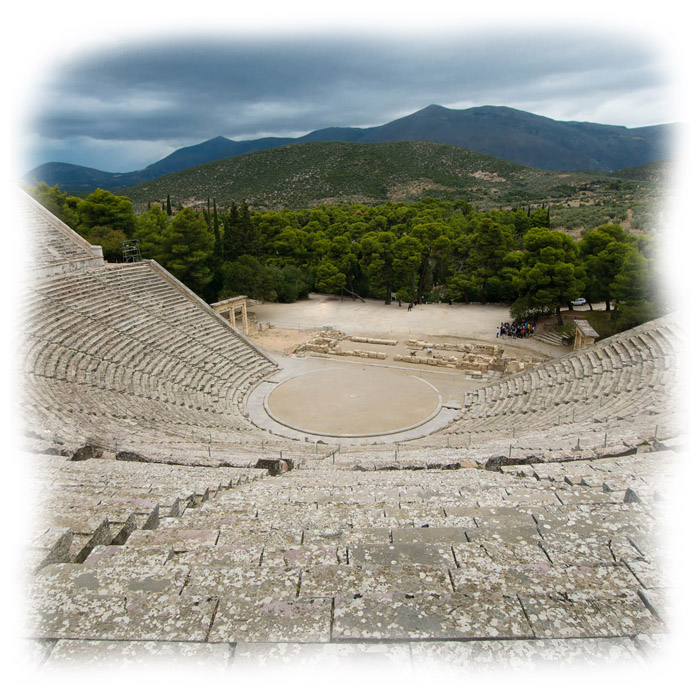 The prosperity brought by the asclepeion enabled Epidaurus to construct civic monuments, including the huge theatre that delighted Pausanias for its symmetry and beauty, used again today for dramatic performances, the ceremonial hestiatoreion (banqueting hall), and a palaestra. The ancient theatre of Epidaurus was designed by Polykleitos the Younger in the 4th century BC. The original 34 rows were extended in Roman times by another 21 rows. As is usual for Greek theatres (and as opposed to Roman ones), the view on a lush landscape behind the skênê is an integral part of the theatre itself and is not to be obscured. It seats up to 14,000 people.

The theatre is admired for its exceptional acoustics, which permit almost perfect intelligibility of unamplified spoken words from the proscenium or skēnē to all 14,000 spectators, regardless of their seating. Famously, tour guides have their groups scattered in the stands and show them how they can easily hear the sound of a match struck at center-stage. A 2007 study by Nico F. Declercq and Cindy Dekeyser of the Georgia Institute of Technology indicates that the astonishing acoustic properties may be the result of the advanced design: the rows of limestone seats filter out low-frequency sounds, such as the murmur of the crowd, and also amplify the high-frequency sounds of the stage. 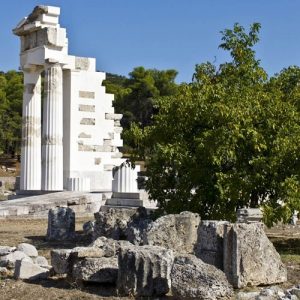 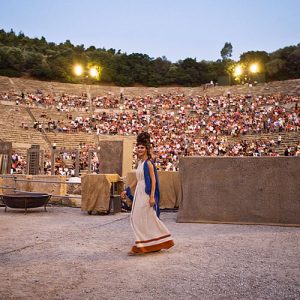 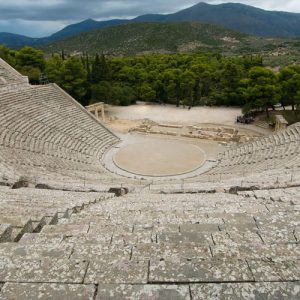 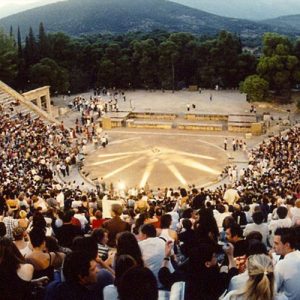 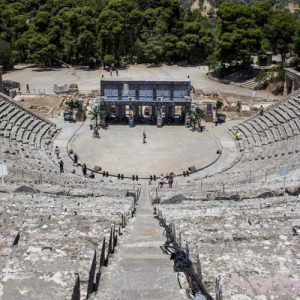